Pros and cons of buying new...?

I thought I would update you guys...
Went to buy. Paid in full. That took 5 minutes. All ready to go.
Waiting. Waiting. Waiting. The girl serving me then comes and says there's a problem with the battery - the car isn't starting and they were trying to start the car.

I told her that I had JUST driven yesterday with no problems.
Her manager later said that it was so odd because they had driven the car down from another location the very same morning.
Hmmm... not a good sign. After waiting quite a long time. I then ventured out and found where they were resuscitating the car.
One of the guys was listening to a youtube video for instructions. They were trying to charge the battery from another car.
They were trying to get help from other sources on the phone (guessing mechanics that work for the company).
Lots of waiting... fast forward...
They managed to get it working - they told me that they put in a new battery.
They told me "We had a battery given to us for another car. It turned out to be for a Nissan, so it was no good for us. Now we just thought: hey, why don't we use this battery!!!!!!!?"
The car now starts.
How lucky I am??

I asked the manager if I could have in writing that there was a major problem that they had to sort out and give details.
He said they had made a note on my customer record.
I said: amazing, love you for that - but can I have in writing in an email please.
He said, erm, we can't do that.

I left, telling him that I would send an email to customer service detailing the problem - that was, I would have a record in writing of the problems.

Aside: the car had Mcdonalds rubbish in the glove box. My nephew who was with me complained that this was really poor service. They loudly advertise that all vehicles are sanitised and safe. They told me they would do a valet before taking the car away. When I got the car, I would still see spec on the carpet. Driving home... the central box where the aux socket is had some SUPER sticky gunge at the bottom and smelled of mango.

IMPORTANT: the car was shaking when doing 60-70mph. I wasn't sure if it was the road. I drove down the same road previously with my old car and it didn't have the same problem. Any thoughts?

Got the car home now. I'll test drive with someone more knowledgeable tmrw. But would be greatful to hear back from you guys.

@calnorth Thanks for pointing that out. I changed my original post. I also deleted the image from the image hosting website - but doesn't get deleted! Grrr! I'll find out what went wrong.
Top

Not off to a good start with new car then. I guess you checked the batt to make sure the did change it and not just jump-start it. The problems you had doing 60mph + will be the wheels need balancing any garage can check that for you to see if there out or not. Hope you got the locking wheel nut socket with the car

Commonly on Batt change the new battery will be registered to the car. That will require special test equipment that both Nissan and the RAC have. It is believed that the registration process commissions the Battery Management System to control charging of the battery correctly. Some might say it doesn't, however, the process is performed....and I have seen the RAC do it.

The new Batt should be a Varta AGM type..there are many posts on that particular subject on this site. Stop/Start cars are a special case as regards Batteries. Some of us call it a very big problem.
Thankfully unbusy (retired)
Mk2 Qashqai Facelift - J11b (2017–present)
1.6 Dig-T N-Connecta
Top

MrMatrix, let’s hope that after all your troubles you have not ended up with a “Lemon” that is going to cost you money to put right. Normally you just do not find a Battery laying around you fit the correct one as Colin mentioned a Varta is the best. You should log all your problems, get some assistance from somebody “Technically Minded” also for their comments. If you get no Service from the Sales / Service Mgr go to the Top MD and give your comments to him in “Writing B & W, if it’s a Nissan Dealership inform them too..
“Normally when you pay out good money for a Car it should have been checked over, Serviced if you are lucky and definitely Cleaned. If I was you I would be back there making noises as they have your hard earned Money - Good Luck Dave

Guys, I thought I'd give an update.
The car is just lovely and drives like a dream.
@calnorth, I called Nissan who said no battery programming was needed. I also spoke to a guy who manages a branch in Kwik who used to work for Nissan, he said no registering is needed.

SHAKING: Big Motoring World agreed to have a tyre replaced and have the wheels balanced by Kwif Fit.
Kwik Fit have got authorisation for the work. So that problem should be sorted.
Would have got done yesterday... went to Kwik Fit... no locking wheel nut. Grrr! @andy2019 I think you saw the future!
Big Motoring World told me to buy one from Nissan. They agreed to pay for.

Other problems... I need some advice on...

- The clutch seems stiff to me. I would describe it as bouncy. The wife finds impossible to drive. When I drive, intentionally, I have to give it a lot of focus and concentration. Can I get adjusted to make more smooth? A friend of mine who's a car dealer, drove the car and said it was perfect and nothing wrong with it.

- Changing gears... it doesn't seem to be smooth. I can feel the corners and edges when changing gear. A few times when putting into first gear, I had to push a little to get into gear. Today, when going to Nissan, I needed to reverse, it wouldn't go into reverse gear. I had to disengage into neutral, when trying again, it slipped into gear OK. What should I do?

I've had hire cars before... clutch is always just right. Changing gears is always smooth. A friend of mine once told me something about some oil lubricants wearing out for the gear changing... once added gear change would be better.

- A super weird problem... the break make a silent squeaking sound. I can't hear! My kids say it's unbearable - like a chalk board being scraped or something. It's a serious problem for us. The guy at Kwik Fit said that back breaks looked brand new. He couldn't see the front ones. He said something like: new brakes sometimes need wearing into and during the summer, because of the heat, can cause the mentioned problem (or at least he said something like that). Any thoughts?

Any help about the above would be great. They told me if I book into Halfords, they should be able to cover the clutch and gears problem mentioned above - I have a 3 month warranty from big motoring world. (Hoping someone here won't say that clutch and gears aren't covered?? If this is the normal response... I need to know ASAP! I've only had the car 6 days now... so regardless, these problems need to be fixed.)

I'm keeping the car. I love everything about it.
Despite the problems with Big Motoring World... so far the after sales service has been nice.

Oh... I thought I would give a picture of the battery:

Guys... I don't mean to make this the longest thread in the world... but...
Wheel nut lock - was nowhere to be found. They paid for a new one.
Kwik fit fitted a new tyre and balanced wheels. No shaking problems now.

One of the guys fitting was talking about silver spray paint around the brakes - he was saying it was crazy and they had sprayed everything - including plastic pipes. You couldn't tell otherwise. Anything to be concerned about? The guy at Kwik fit said they do this to hide rust?

mrmatrix wrote: ↑
Thu Aug 06, 2020 4:06 pm
Guys, I thought I'd give an update.
The car is just lovely and drives like a dream.
@calnorth, I called Nissan who said no battery programming was needed. I also spoke to a guy who manages a branch in Kwik who used to work for Nissan, he said no registering is needed.

Perhaps I should clear something up here..if you don't have the Nissan diagnostic documents or not trained then you won't know this procedure. Its two things that are configured by Nissan's Propriety Consult Tool. Not doing this is possibly of no major consequence...till something goes wrong?

1. Cumulative Battery Discharge Value stored in IPDM/ER must be erased. This is akin to registering a new battery to the vehicle so that usage is monitored. Its possible that the battery charge values can be adjusted overtime...for an ageing battery. Its a bit of Science really to protect batteries.
2. Possible DTC's caused by battery connect/disconnect. Could confuse the next diagnostic if not cleared 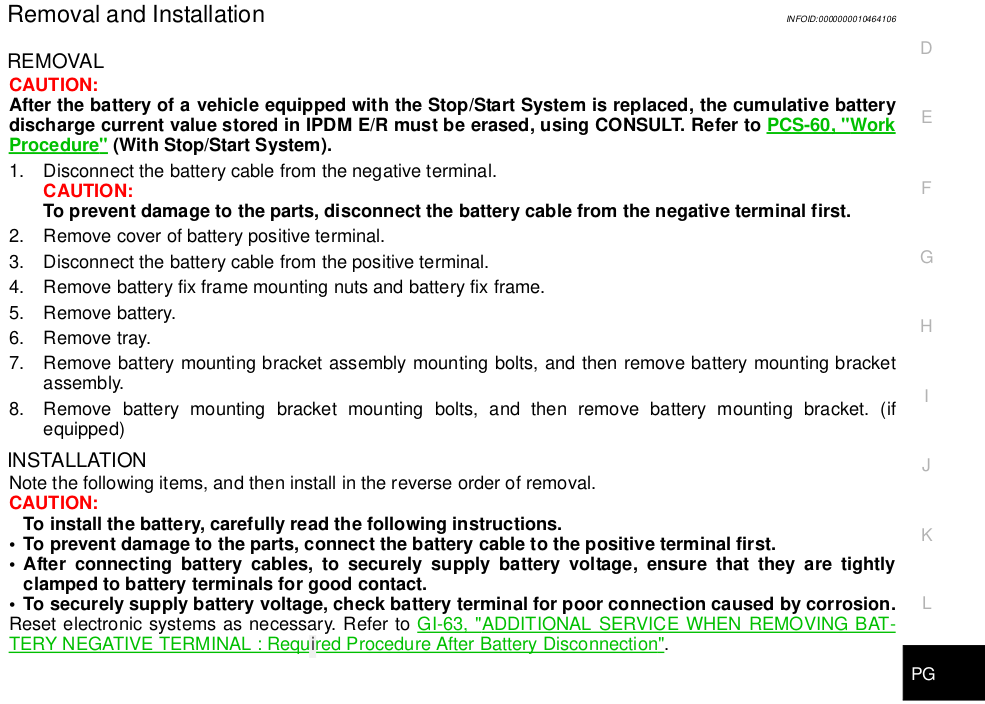 As for the silver overspray, it looks like someone has painted the calipers, hubs and Backing plates, and done a really crap job of doing so.