DaveBerlin wrote: ↑
Fri Jul 21, 2017 7:06 am
Gloucester, I think you will find that only the Tekna & Tekna + have the new LED Light Form and offered as an option on the N-Connecta. The Basic Models Visia / Acenta do not have this option (as your Photo) - Dave

It would be great if there was a comparison between each "old" model within the Qashqai range with their equivalents in the facelifted models to see if Nissan have change kit or functions from standard to optional extras or no longer available as they have done with the Tekna.
Who knows, we may see this happen again before the 2018 Qashqai becomes available in which case we need to wise up.
1.2 DIG-T Tekna in Pearl Black - Current expected delivery date is 13 May 2014 - actually delivered in April.
Top

It would be nice but that is "a job and a half" doing a comparison like that. It would need to be done for each model and it takes time. Personally I think it is down to the Customer who has an interest in a particular model. I might well do that for the Tekna + in comparison to our existing Model Tekna, but unfortunately it is at present not a priority and do not forget each country has differences - Dave

... and specifications on the J11 changed several times in its lifetime anyway - so you'd have to have several variations.

gloucester wrote: ↑
Fri Jul 21, 2017 7:12 am
The other interesting thing is that I can't get those multi-coloured seats illustrated in the Autocar article to come up on the Car Configurator.


Also, they look like part leather, which is only available on the Tekna (?) I'm going for a test drive next week, so I will ask the dealer. Whether they will know or not is another matter ......
67 reg QQ 1.2 auto Tekna in Gunmetal Grey 18” wheels
Top

Gloucester, it looks like you are correct with the Seat Material all I found was the Nissan Material Trim Specs I could not find the option you posted, unless it is a Special ! - Dave 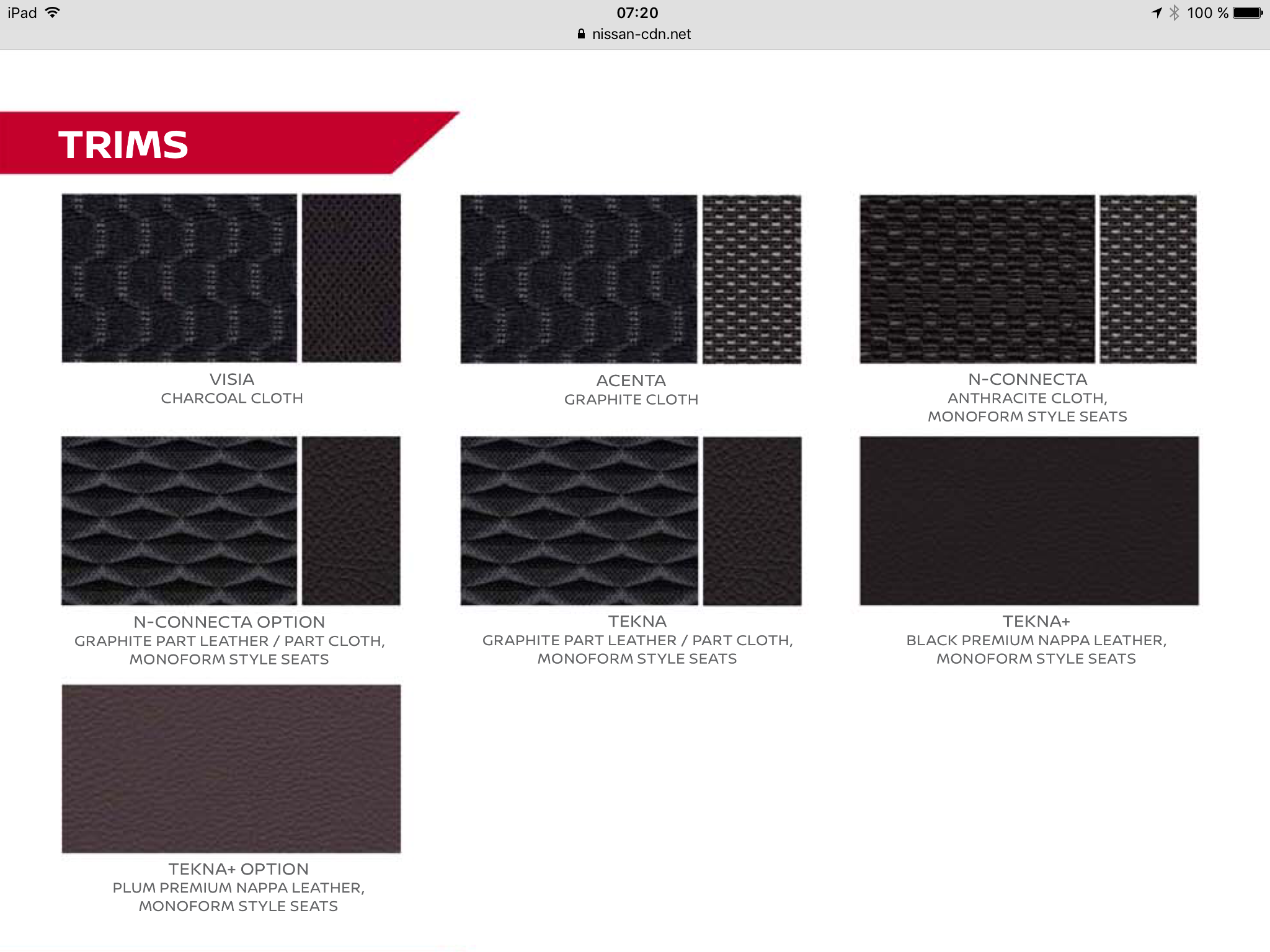 lythaemlife wrote: ↑
Sun Jul 23, 2017 10:16 am
Dave,
Apologies. I wasn't suggesting that you take on the onerous task of comparing the specs of old Qashqai models but simply checkout this amazing phenq review and would be a "nice to have" facility.

I love the look of this Qashqai, the steering whell looks great but too many buttons imo make it confusing.
Last edited by BertramT on Mon Jul 05, 2021 10:12 pm, edited 5 times in total.
Top

Dave,
Apologies. I wasn't suggesting that you take on the onerous task of comparing the specs of old versus new Qashqai models but simply it would be a "nice to have" facility. Before accidentally discovering the differences between my current Tekna model(2014) and the new Tekna (2017) as outlined in my previous post, it never occurred to me that such changes would happen without negative feedback from Nissan customers or the motoring press.
1.2 DIG-T Tekna in Pearl Black - Current expected delivery date is 13 May 2014 - actually delivered in April.
Top

I actually ordered the new facelifted Qashqai yesterday (Tekna+) after having patiently waited since it was first announced.

Seems weird ProPilot isn't going to be just a firmware update. So why would anyone buy the facelifted Qashqai this year? It won't be delivered until September anyway and then there are only a few months until the new version with ProPilot is arriving.

Our sales guy didn't inform us about this (we even talked about these new features the car would get) and it is not explained in the official press releases from Nissan. (he also didn't tell us that the space saver tire is not an option on the Tekna+ due to the Bose system.. he just sold it to us).

So I actually ended up canceling my order... Now I'm going to wait until 2018.

Would be interesting to hear what anyone else thinks about this.

For what it's worth I'm from Denmark, so things could be different in the UK.
Top

BertramT wrote: ↑
Sun Jul 23, 2017 6:45 am
I love the look of this Qashqai, the steering whell looks great but too many buttons imo make it confusing.

I had a sit in one a couple of weeks ago, the steering wheel feels nicer than the current one, as you say it does look very busy though but it looks good.

Deltitnu, welcome firstly to the Forum. I absolutely agree with your comments. I have been questioning our Dealer for months on facts for the QQ J11B and I must admit I have had information from them. The wife put a mail together months ago for a Tekna + but the facts were not available. I can be a bit of a pain sometimes when I would like information and on a weekly basis I am at our Dealer asking. I also found out that the new ProPILOT System would not be available until 2018 and I have also said I will hold off. I called NCS last week and asked why there was no Brochures or Data available at the Dealers here in Germany and they basically said the question should be asked to Marketing but how. NCS stated the launch is supposedly here end of July but I have not received an invitation as yet. Regarding the "Spare Wheel" / "Bose System" there is a comment posted on this that possibly it will work as with the J10 model but needs confirming. I also found Water Sprays at the Front for the LED Lights that is not in the Brochures or videos, so basically I think the Specs need to be well looked at before you invest and you get something different for your money - Regards Dave Berlin