Petrol or diesel? + Auto or manual?

Petrol or diesel? + Auto or manual?

Diesel: £0 Road tax? Happy days!
This was the one I was going for.

I went to a big dealer where they had loads of qashqai's.
The salesman, he was a lovely chap. I could see through all sales talk and a few white lies.

But then he mentioned a petrol car. I hadn't considered at all!
One or 2 Google searches tells me petrol is the one to go for.

My usage: 99.5% local run arounds.
I read an article saying petrol was better for many reasons. No dpf filter. Less heavy engine. A few other easy to understand reasons where given.

That reminded me... My neighbour who's a car dealer told me he only goes for petrol - much less things to go wrong!

AND, while on that subject... Am I better off with auto or manual? My neighbour, also prefers manual, same reason - less things can go wrong.

Fuel economy: diesel wins it seems always. But at what cost? The article mentions diesel repairs cost much more on average.

Or... Is it all different for recent cars? Are latest diesel engines much more reliable and efficient. And as such old reasons don't matter?

The article I read was only 2 years old.

So what car are you driveing at the mo petrol / diesel. Did you pass your test in a manual or automatic car. As you'll need to re-take your driveing test if you passed in an automatic and now want to get a manual car.
As for cost on cars anything can go wrong with a car eaither if it's petrol or diesel so wouldn't bother too much about that. If you don't do motorways then get petrol. Car tax is more expensive from 2017 £145 petrol&diesel.
No diffrence in a 2016/2017 car reg it's just a number all been built and sat around in a storage area waiting for a new reg to go onto them at some point

I’m not certain but I think a petrol car of that age will be a 1.2 turbo.
Whilst we have to remember that there is more likelihood of hearing stories of things going wrong (people rarely post to say "hey, my car's great) there are lots of sad stories about the 1.2 turbo engine. Many (possibly all) were fixed under warrantee but someone on here has a handy list of the VIN numbers to look out for when browsing.

I'm not saying that they are all bad but the CVT auto also has well publicised problems.

Here's the relevant page from the 1/2/16 brochure - with the four engines as noted above reading across the top:

1. When I bought my 2015 in 2016 I would have liked an auto but manuals outnumbered autos significantly - and I wasn't keen on a CVT anyway. I was wary about the performance of a 1.2 engine in a large car but was pleasantly surprised on the test drive and hence bought a slightly used 1.2 Manual Tekna - rather than the pre-reg 1.2 N-Connecta I'd originally been attracted to.

2. Subsequently on here I kept reading more and more about 1.2 petrol engines failing and having to be replaced. Although mine appeared to be fine, I decided to trade the car in when the warranty expired rather than extend the warranty. To be honest if I'd had a good relationship with the dealer I'd have kept the car and probably bought a three-year warranty extension, but it was such a trial dealing with them - for example it took three visits and a month to even get a quote for the extended warranty, which was then higher than others were quoting - that I decided enough was enough and went elsewhere.

3. During the period I had the car it did however such several "common" faults - defective AC condenser, defective Fiamm battery, wheel corrosion, and a noisy bush in the steering column, all of which are documented on here. It also seemed a particularly bad specimen in terms of hardly ever actuating the stop/start system.

4. Another well documented problem on this forum is the failure of CVT gearboxes.

5. The 1.5 diesel is the only engine of the four which has a cambelt and hence that needs replacing periodically - which more than wipes out the cost saving in road tax! The replacement frequency is 5 years or (variously quoted) 60k/75k/90k miles. So if buying a 2016 car you'd either have to negotiate a change into the sale or factor in an expenditure of £500-£700 within 12 months (working on the time limit). Note that cost is what people typically mention but some dealers are advertising it for a "bargain" £309 - although you'd have to pay extra for the recommended water pump replacement. See also *

6. When I did trade my car in, in 2018, I think from the salesman's relief when I said "petrol" that he would either have given a low PX or refused to have it had it been diesel.

9. My actual advice would be spend a little more and get one of the more recent 1.3 cars, either 140bhp or 160bhp (but the former is perfectly adequate) though note the DCT auto is only available with the 160.

Timing belt replacement on 1.5dci models including Juke, Qashqai and Note plus any other Nissan 1.5dci model including the NV200 van replaced with Nissan genuine Nissan parts at HughesAutos.

Early models renew the timing belt (every 75,000 miles/72 months; Timing belt renewal intervals may be subject to updates and may differ regionally) later models do have extended intervals.

Failure to replace the timing belt can cause major engine damage costing hundreds of pounds to repair. Why take the risk?

HughesAutos offer for timing belt replacement £139 including Vat. As Nissan have offers on the parts HughesAutos have purchased stock at this low price and passing the saving on to you.

Another thing to bear in mind is that Nissan often shuffles around what trim levels are available, with changes being made such as the deletion of the panoramic sunroof from Tekna spec, and there are various option packs so comparing cars can be quite involved and needs a detailed analysis.

There are some amazing pre-reg bargains to be had at the moment. This car on Nissan's configurator is coming out at £29,690: 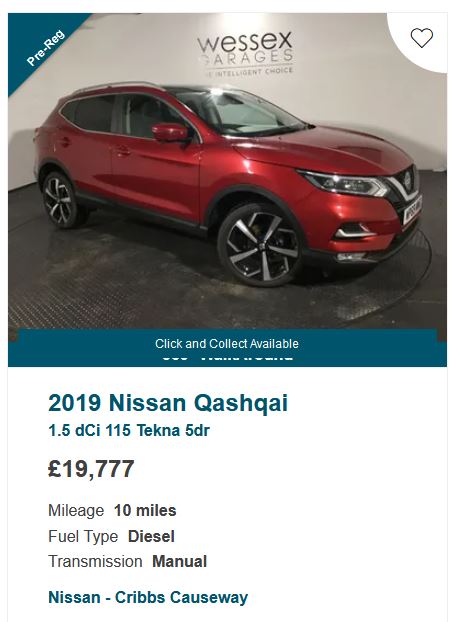 However although registered around 9 months ago it may be a lot older since it still amazingly has the obsolete Connect 3 infotainment system, supposedly superseded in September 2018! It may even in that case have the older 1.5 diesel without AdBlue...
(2015 Nissan Qashqai Tekna DIG-T 1.2 sold 15/6/18) ~ 2018 Suzuki Ignis SZ5 - 2018 Yamaha MT-07
Top

However although registered around 9 months ago it may be a lot older since it still amazingly has the obsolete Connect 3 infotainment system, supposedly superseded in September 2018! It may even in that case have the older 1.5 diesel without AdBlue...


Providing it has the new AdBlue engine and you can live with the old entertainment system ( both on my 19 plate ) that is a fantastic price for what is effectively a brand new car.

Fuel economy on the new AdBlue 1.5 Diesel is awesome

Guys, thanks for the expert replies.

This is the article I read: https://www.whatcar.com/advice/buying/d ... esel/n1110
Everything mentioned seems to make sense.
Yes of course, things can go wrong with any car.
But, the article suggests that diesel cars need more maintenance and when things go wrong, more cost is involved.
It says that the engines are larger - therefore need to cope with a heavier load and pressure?
Importantly: the DPF filter if driven only in town, can and will clog up.
My driving is JUST local! 95% of trips are less than 5 miles. (As mentioned initially 99.5% will be local driving.)

@gloucester I had my mind made on a car at b*gmotoringworld - but figured I could save £500 - £900 buying elsewhere (that could mean a 250 mile trip somewhere in the country though!) for same spec and mileage car.
I was looking at this car now: https://www.autotrader.co.uk/classified ... 7161324254
Any thoughts?
I know it's basic model. I would love to have a big screen for no reason other than having a big screen. Sat nav is pants. Reverse camera - will miss having, but happy to miss out on to save money.

ALSO...I scan read the PDF doc you gave a link to in my other post... it says if driving only short trips, then a light would come on for diesels saying you needed to drive 40MPH for 30 minutes. If that's all that was required, then diesel is a good option? For local only, is diesel more or less economic than petrol?

@andy2019 I can drive any car. Auto or diesel. It's the wife who would like an auto. But, I have no problems getting a manual - she'll learn to live with.
Reading what's said about CVT, I guess manual is safer option?

Oh... my view on panoramic glass roof - how wonderful - but it's not a sun roof - i.e. one that can open. Oh... what's the point of having!! Happy to save money instead.

Yep nothing wrong with that car in the link on autotrader and it's passed m.o.t fine aswell. It's the same colour as mine

and only got mine late last yr with 13.000 on the clock.
No need to drive around i had mine moved to local garage as car was up north when i spotted it only took 7days to get it moved for me. As you don't do the milage go for petrol then as car tax is both set at same price for the of car you want. The panoramic roof is great lets loads of light in

not many cars do sun roofs these days and they often end up leaking anyway over time.
Top

@gloucester I had my mind made on a car at b*gmotoringworld - but figured I could save £500 - £900 buying elsewhere (that could mean a 250 mile trip somewhere in the country though!) for same spec and mileage car.
I was looking at this car now: https://www.autotrader.co.uk/classified ... 7161324254
Any thoughts?
I know it's basic model. I would love to have a big screen for no reason other than having a big screen. Sat nav is pants. Reverse camera - will miss having, but happy to miss out on to save money.

The advert is suspicious. It's noted as having the "Tech Pack" - according to the May 2016 brochure the Tech Pack is:

They may have priced it on the basis that's installed but the picture of the interior shows the standard Acenta radio. Ask them what the "Tech Pack" on this car actually is.

However it's possible that they've used interior pictures from a similar car not the actual one being sold - this happened with the one I bought and I had to have three of the four wheels changed when I realised the ones on the one I'd bought were badly kerbed. If you look carefully at the bottom left of the rear seat shot, there's a touch of red - whereas it should be blue! So the dashboard shot may be a different car without the Tech Pack fitted.

So potentially a discount on the price quoted and you'd have to check whether it also does have the Smart Vision Pack:


This shows you the published spec but as I've said Nissan have a habit of changing things.

Otherwise it looks like a decent car - certainly low mileage. The Acenta's 17" wheels will make for a comfortable ride.

Since it's the 1.2 petrol you need to listen carefully for any rattling sound coming from the engine. Personally I'd also want a comprehensive warranty knowing about engine problems with the 1.2.