The place to discuss everything else..
Post Reply
13 posts

This just looks like some good advice for the Nissan Owners with E-Autos, might be worth a read for the members with one - Dave

Was it Honda or some such stating the other day that by 2022 they will only build hybrids? Probably a wise thing to do instead of pure Ev and all the faux virtue signalling that goes with it.

Concerns here are growing over national power supply policy and in particular our rather foolish dependency on inter-connectors. Thats apart from distribution inadequacy to date.

This issue came up in UK Parliament on Monday:

The advice in that article is just simple common sense!


calnorth wrote: ↑
Thu Jun 18, 2020 8:21 am
Was it Honda or some such stating the other day that by 2022 they will only build hybrids? Probably a wise thing to do instead of pure Ev and all the faux virtue signalling that goes with it.

Not heard that about Hondas but Suzuki appear to be switching over to Hybrids. The Ignis is now hybrid on all trim levels. The Celerio was discontinued. The Jimny is severely restricted supply.

The main problem with pure electric cars continues to be their high cost - which just isn't justifiable for low-mileage people like me (I've just had the 2 year service on the Ignis - at 7650 miles!).

I think it was Toyota who are going to manufacture only electric or hybrids. I've seen the ad but can't recall the year, 2025 rings a bell, but could and most probably am wrong

Yep I was wrong, 2022 and it's Honda. Note to self, listen with both ears.
Past cars Mercedes B Class, S Class, E Class Estate, E Class Coupe, G Wagen, 260E interspersed with Peugeot 406 and Audi Coupe.
Top

Take a look here see if this might help :
Toyota : After decades of going all-in on hybrid technology, Toyota now has to throw its considerable resources at developing electric vehicles. ... That's why Toyota has decided to speed up its electrification timeline, according to a report Friday by Reuters. In fact, it plans to get half of its sales from EVs by 2025.

Honda and General Motors announced they will be working together to develop two all new electric vehicles for Honda. They will be built on GM’s global EV platform and powered by Ultium batteries. The exterior and interior of the new EVs will be designed by Honda and the platform will be engineered to support Honda’s driving character.

I need to keep an eye out here as our Nissan Dealer has also a Suzuki Dealership.
On January 20, Magyar Suzuki announced that the company has prepared the introduction of the new hybrid models with a EUR multi-million investment. Magyar Suzuki started the serial production of hybrid vehicles in its Esztergom factory in December 2019, moreover, they plan to produce exclusively hybrid passenger cars at the plant for the European Union market this year. The crowd-favorite, domestically produced Vitara and SX4 S-CROSS models - will become available at the end of January 2020 within the whole sales network of Suzuki in Hungary and in the countries of the European Union as well.
Suzuki hybrid models equipped with the new 48V ISG technology decreases fuel consumption and the rate of carbon-dioxide emission by 15-20% compared to their traditional versions according to experience, at the same time, they are lighter and smaller than other hybrid or plug-in hybrid systems.
In addition, the company is cooperating with Toyota to introduce electric cars in the Indian market. So, most joint projects will be realized for the largest market of Suzuki, but the two Japanese vehicle manufacturers are helping each other in Europe as well. The two parties - among others - also will work together on the development of autonomous driving systems.
11.19/1.3L/160PS/Tekna+/DCT/PrOPILOT/KAD Gun Metallic/Trunk Lower Finisher/Rear Glass Finisher/Ambient Lighting-LED’s Innen/Entry Guards Illuminated/Sport Pedals/Front Styling Plate/LED No.Plate/Chrome Door Handles/Rear Valance/Giacuzzo Alloys + Falken
Top

I don't know how much your government subsidies are but that price for a Nissan Leaf at €19,047 is inexplicable unless they're enormous.

Gloucester, again to clear up your question of doubt on the prices I do try to inform with correct information. In Germany there is an incentive now for E-Cars and if you take a look at this part section of the Data you will hopefully see how it works - Dave 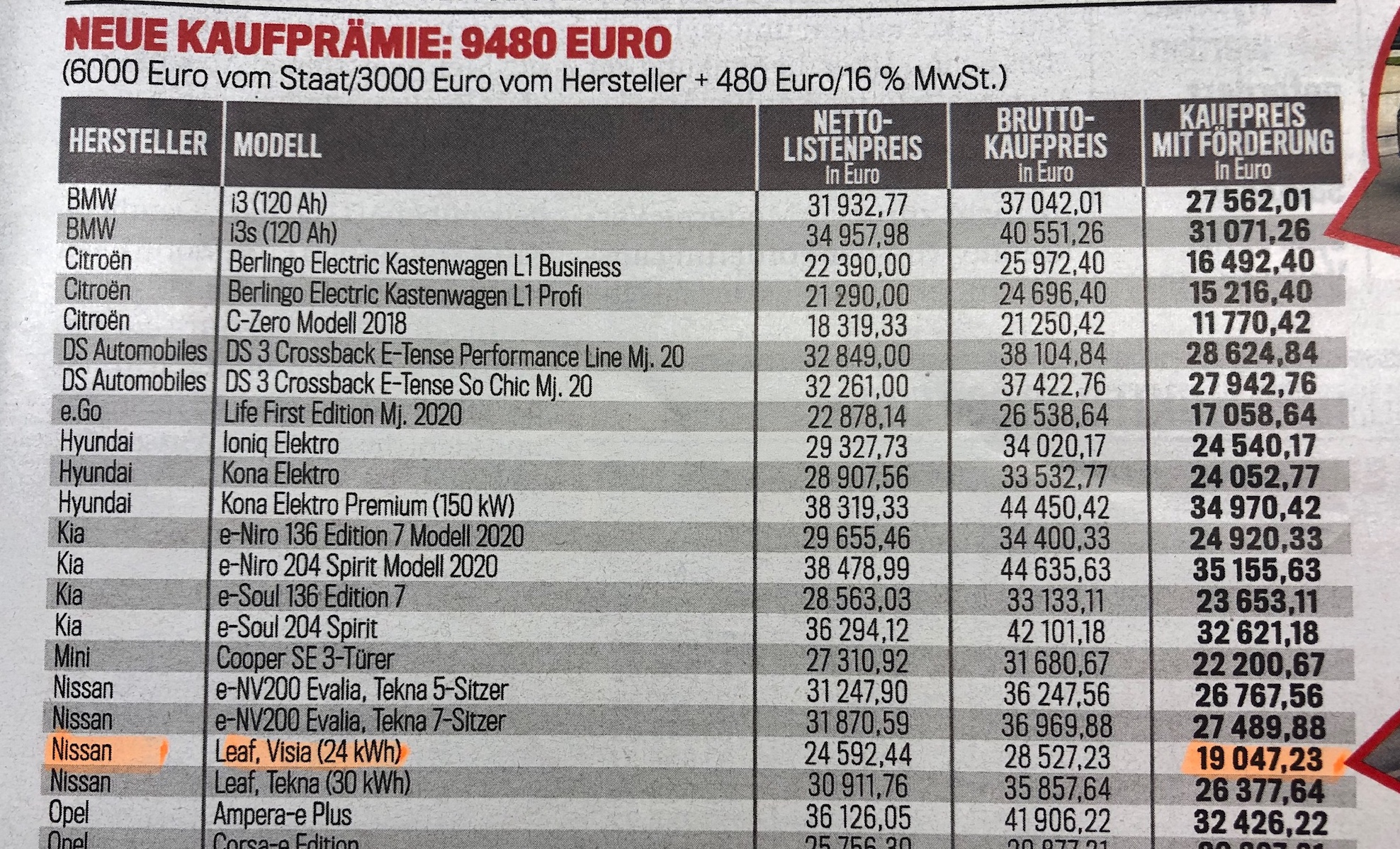 I suspect HMRC will be on that...rats up drain pipes. As they were with us in the military.
Thankfully unbusy (retired)
Mk2 Qashqai Facelift - J11b (2017–present)
1.6 Dig-T N-Connecta
Top

A couple of years ago I tried to buy in the US a New Dodge Ram Pickup from a Dealer (a lot cheaper) but they would not sell one, only if were second hand or if a friend bought it and then I bought it from him, some new Regs, in the end it was bought in Germany. But if imported the problem then comes on entry into the new country with all the modifications for Country Specs / Laws - Dave 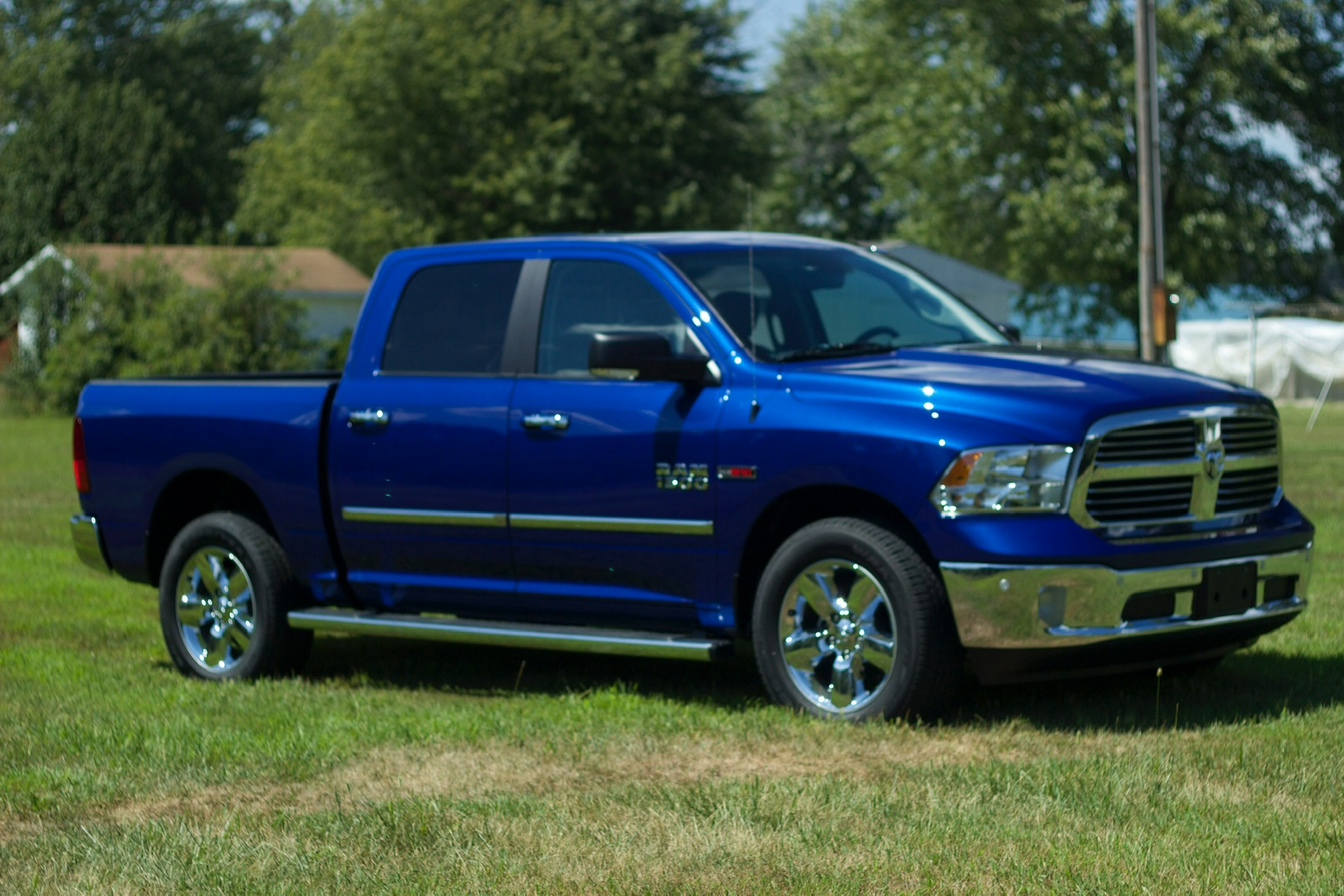