Hi all! I'd be grateful for any assistance with the following issue please

I purchased a new Qashqai ST at the end of July 2020. When I attempted to play music via the USB connection - 3 days after taking possession of the car - it couldn't get through one song without the Nissan Connect unit turning itself off and then on again. The radio worked fine and it could connect to Spotify via bluetooth with no issues, it only rebooted when I was using the USB connection. I rang the dealership straight away and told them about this constant rebooting issue - they asked me to bring the car in so they could investigate the problem. After having it all day they informed me that the USB connection required a software update, however there was no update available. They didn't know how long I'd actually have to wait for this update, but told me to allow from 2 weeks to a couple of months. They told me not to use the USB connection (and I haven't) and that they'd be in touch to let me know when the update was available. That was 3 months ago.

Today I decided to play a CD because I'm sick of the radio and using Spotify. It was the first time I've used the CD player and I couldn't believe it when the unit started the stupid rebooting loop again. Exactly every 4 minutes the unit shuts down and then restarts. As before, the radio still works fine and so does the bluetooth. It's frustrating to say the least

It's Saturday afternoon here in Australia so I'll have to wait now until Monday to ring them again, but in the mean time I thought I'd ask for help on this very useful forum.

Has anyone else experienced an issue like this with their Nissan Connect unit? I'm starting to suspect it might be faulty and they're just fobbing me off with this update story hoping I'll go away. To say I'm not a happy camper at the moment would be an understatement. This was a brand new car and it's just not good enough as far as I'm concerned. I actually said as much to the technician 3 months ago when I dropped the car there. He shrugged his shoulders and said "yeah, it's not great but what can you do?" Hardly a confidence inspiring response...

Anyway, thanks in advance and my apologies for the lengthy post....
Top

The firmware updates we on this site are very aware of refer to pre 2017 head units...no other firmware updates have been issued post 2017 that relate to the earlier problem of ad hoc rebooting. Or any rebooting related to CD/USB for that matter.

You are dead right about the sickening UK radio content. That in itself includes a DAB reception problem apart from program content.

The dealer appears to be an idiot so I'd say get onto Nissan Customer Services with a severe complaint. You have a faulty head unit.

Perhaps what I should of said is that the dealer could have tried to reload current firmware in case part of it had corrupted.
Mk2 Qashqai Facelift - J11b (2017–present)
1.6 Dig-T N-Connecta
Top

Is the Qashqai ST Australia or New Zealand ?
Doesn’t really matter to us in Europe but it’s sad to hear that your dealer is as bad as a number of UK dealers !!
Contacting Nissan Customer Service seems to be your next step
July 2019 Qashqai 1.3DIG-T 160 DCT Tekna in Vivid Blue
previous March 2017 Qashqai 1.5dci n-connecta in Gun Metal Grey
previous September 2014 Juke 1.5dci n-connecta in Gun Metal Grey
Top

Yes, I honestly think the same thing Calnorth, that it's more than likely a faulty head unit.

MikeGC, I'm actually in Australia. I'm guessing that the service department will be less than helpful when I contact them about this issue again. I think you're quite right - contacting Nissan Customer Service should be my next step.

An update and a request for some more advice please!

The service department had my car for half a day and then gave me the same story about it needing a software update. The guy I spoke with said this was a known glitch with the NC unit and even if they replaced it the same thing would happen. I told him I couldn't find any evidence on the internet (which we all know is the first place people usually go to air their complaints and grievances or to ask for help) that this was the case at all. He simply ignored that. He just kept saying that Nissan was aware of the problem, that Nissan was still working on the 'magical' software update to solve the problem and I'd just have to keep waiting. That was the end of any patience I had left.

I reminded him, as politely as I could, that this was a brand new car we were talking about. A brand new car in which a simple USB connection had been causing random reboots of the Nissan Connect unit from day one. Now to cap it all off, I've just discovered 3 months down the track that playing a CD in this brand new car causes the same rebooting issue. I told him it wasn't good enough, in fact it was unacceptable and I was tired of waiting for something that should have worked properly from day one to be 'fixed'. He told me he sympathized but their hands were tied, they had to do what Nissan told them to do. For further clarification he gave me a printout of something called Service Technical Info which he had obtained directly from Nissan. The information on this sheet was published on the 11th of June 2020 and I don't think it represents the issues I'm having with my unit at all, especially the CD player problem. (I'll attach a copy of it to this post to see if anyone else agrees). Our conversation then ended with him suggesting I give Nissan Customer Care a call, which I was going to do anyway....

) I told her about the ongoing issues I've been having with the NC since I first bought the car. I also told her that they're not the same as the known USB fault documented on the printout I was given. She took all my details and asked me to leave it with her, assuring me I'd hear back from her within 24 to 48 hours.

I live in Australia and there's no Qashqai forums to guide or direct me here unfortunately....if Nissan refuses to do the right thing I have no idea what I can do next. I'm hoping that perhaps someone over there in the U.K has a suggestion? Thanks in advance for any help that is offered 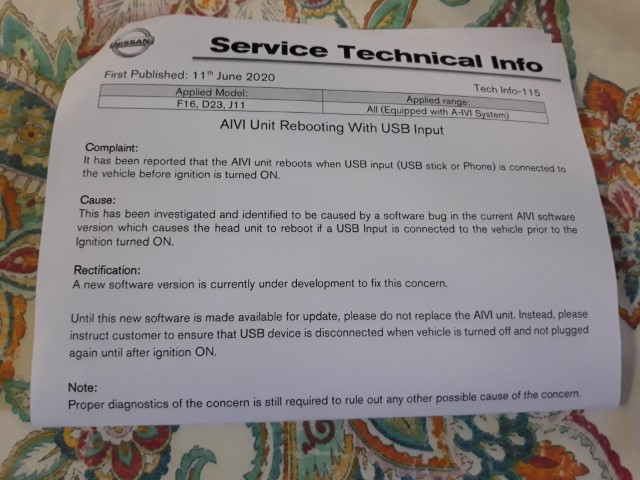 From the Service Sheet above:

Current F16A does not have any issues to date. We term the J11B head unit Connect 3. Connect 2 prior to 2017 was a rebooting nightmare that Nissan took far to long to fix. I'd say they left their Customer Services and Dealers hanging out to dry. Customers...neglected of course.

Two things to tell us: (am not sure what Connect head unit you have)

Can you check the firmware and hardware version on your car..screen view below
Is your head unit fitted with and SDCard for Maps as attached pic below?

The head unit screen should look similar to this: 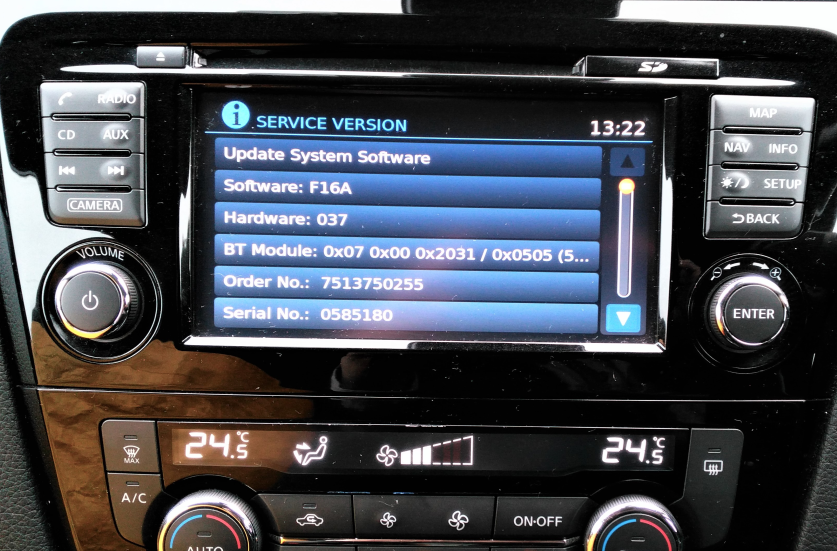 I should add that the above Service Version screen maybe in the hidden service menu. Access to that is by the following procedure. I am guessing your head unit has similar features to ours.

History:
Classic rebooting mentioned in the last post was on pre 2017 Connect 2 head units and fixed by a firmware mod..D306 and belatedly I think. Version not relevant to this post though. It arose during use of DAB Radio and USB sticks + CDs. Complete shut off and restart...a sort of Windows PC BSD and repeatedly. I thought it was a memory problem in that the system processor simply ran out of it...or memory was faulty. Some thought background Traffic Announcements triggered it or particular DAB radio stations proximity? Some units were removed and shipped back to France and came back faulty. Updated firmware for free seems to have fixed it which indicates a major software management mess of various types....stack overflow or limited memory with inadequate event control. Typical Real Time mishandling.

Thanks for helping me out again calnorth, I really appreciate it

I did manage to find the hidden menu but I'm not sure what parts of it are relevant or how helpful any of it is going to be - it's all Greek to me! Anyway, I've attached screenshots of what is listed. Thanks again! 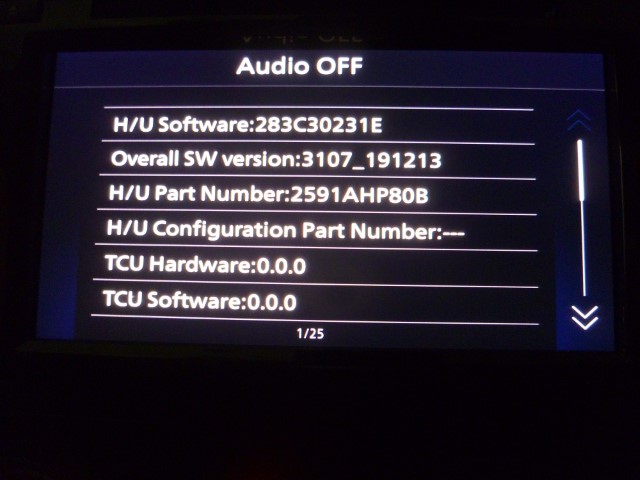 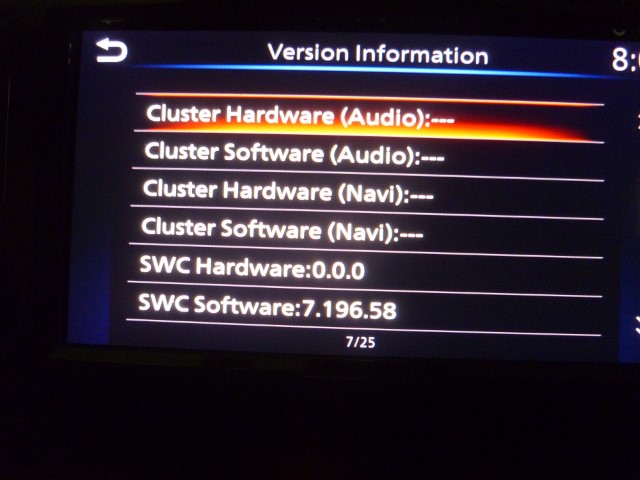 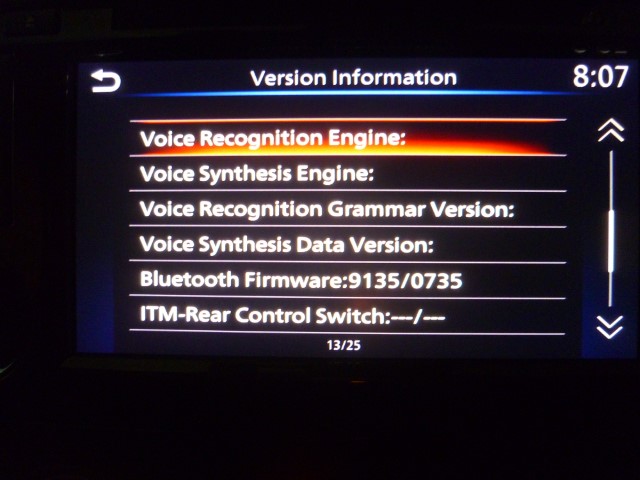 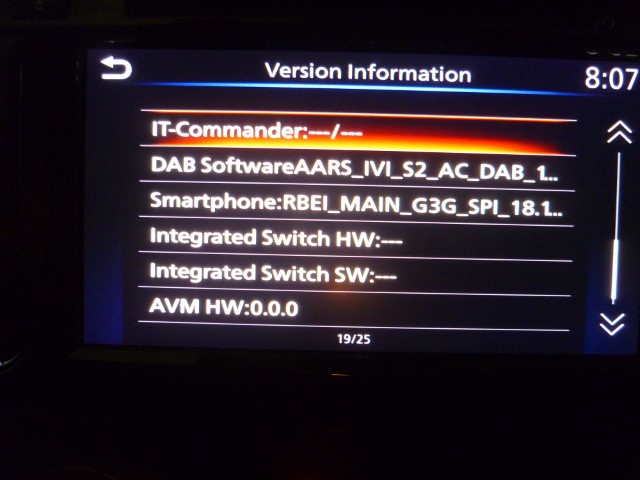 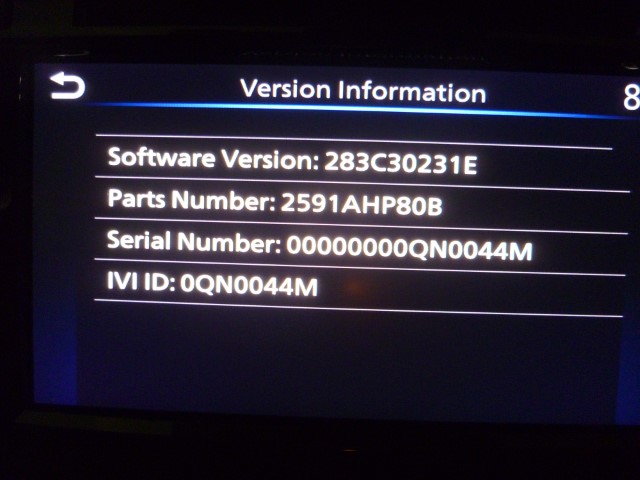 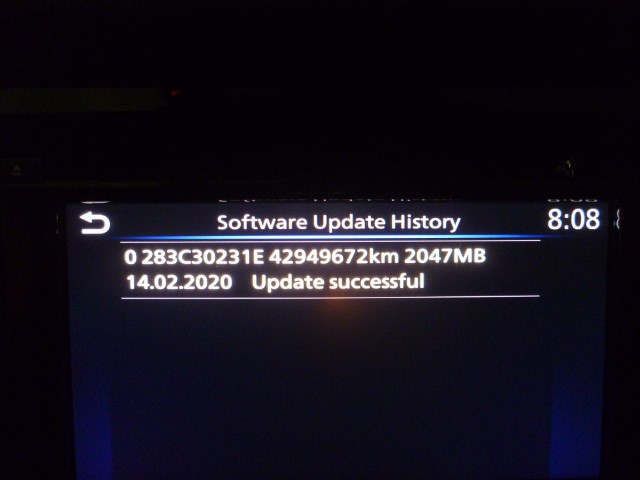 None of that relates to your Service Tech Info Doc which is a concern. Can you post a picture of the front of the head unit...like the pic I posted above.

Its possible you have the latest Connect head unit. I think we call that Connect 4 which provides Android and Car Play functions. Need someone here to post their hidden Service screens.
Mk2 Qashqai Facelift - J11b (2017–present)
1.6 Dig-T N-Connecta
Top

Yes, that's correct Calnorth, my Qashqai ST is a 2020 model and the unit does come with Apple Car Play and Android Auto. Apologies for the terrible picture - it's night time here and dark in the garage even with a light on

Thank you again for all your help... 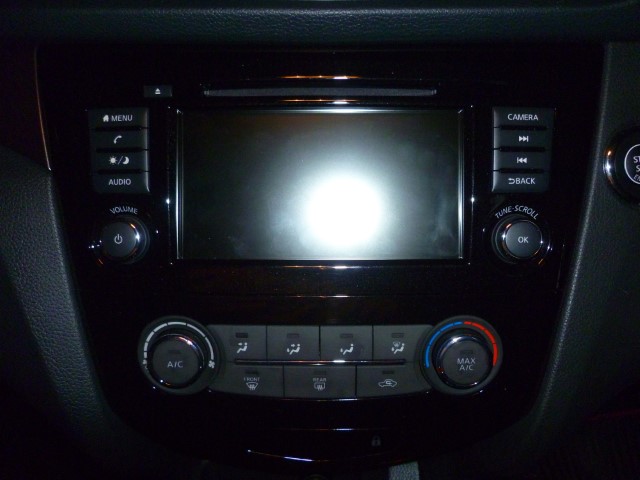