More On the Favourite Subject these Days “Chips” - Dave

Just was speaking to my neighbor who has a J12 model and had to go to service center as the battery level was so low tripped the alarm which means you can't start car. It appears cars are stored part built awaiting parts and battery levels run down. Ensure dealer in PDI makes a check of battery levels.
Top

QaiFan, I promised @ my next visit I would ask a few questions @ our Dealers - Dave

1. There is No Digital / Mechanical Indicator for the J12 Lithium Battery Status.
2. Dealers do appear as mentioned before to have the posibilty of an overview on Nissan Production Orders.
3. There are Internal Specification Changes coming to all models except the Tekna + (Info’ Not available Nissan only).
4. When I order there will be Price Increases coming !
5. Asked the Stores Guy about the “LED Foglights” , he could not find them in the System for the J12.
6. If I said Yes to our Quotation and ordered by the end of Sept, delivery was stated as being March 2022.
7. Yes there are Delays.
8. Some Spec options are not available.
Hope this answers a few questions ! A lot of information is ** Confidential for Nissan Only, so I did not push too much and these comments were purely from a discussion.

Recently I posted information on the ADAC QQ J12 Safety Card (Interesting German Safety Specs) and we discussed this today and the plan is to now to copy this for German Customers.
As an example Sheet 1 / FYI :: 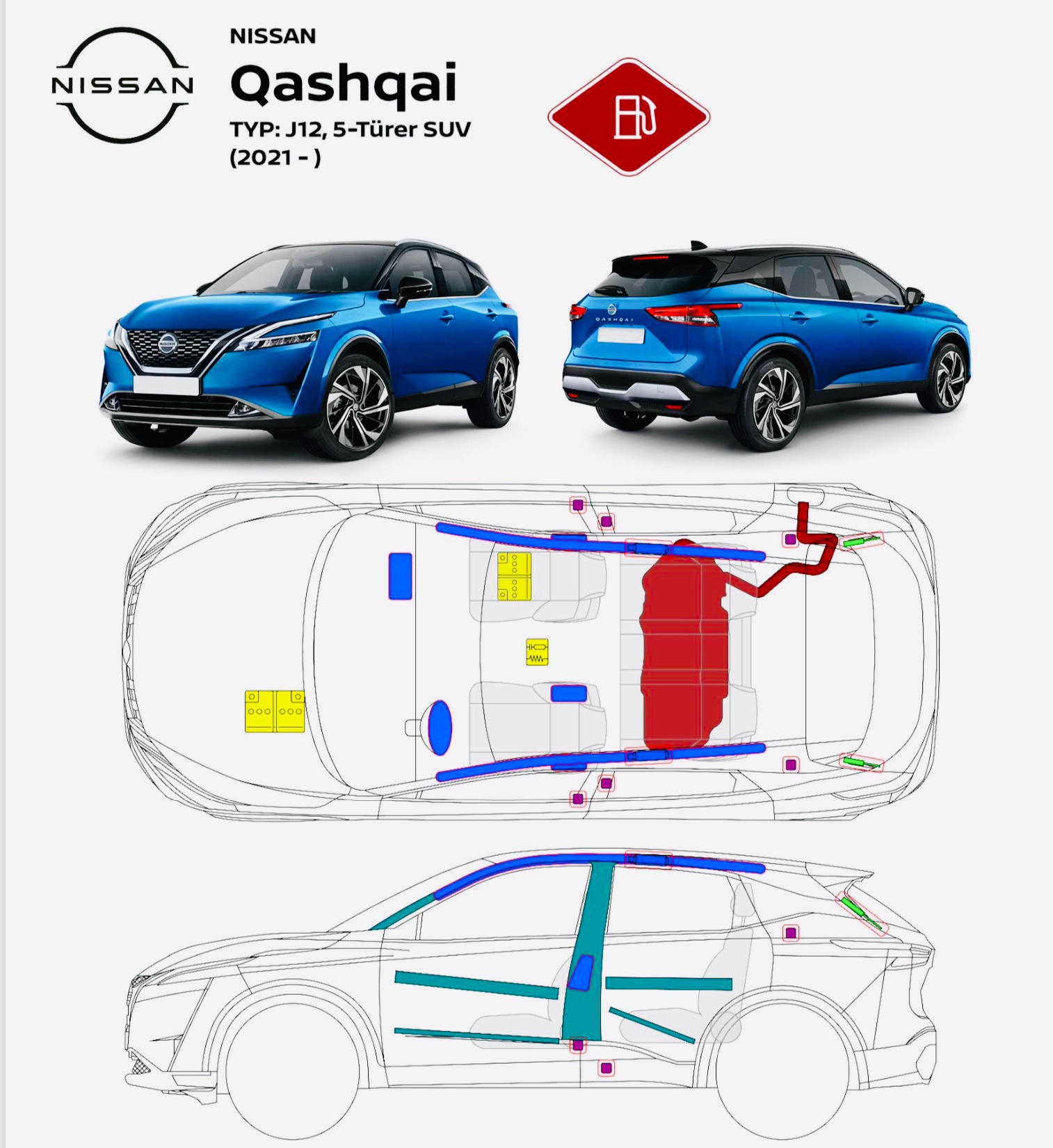 DaveBerlin, thank you so much for getting this information for us !
This has quite a bit of new information that I value a lot.

But would your point 3. mean Tekna+ model will not be UPgraded to newer technology, or, does it mean it will be the sole trim that is not DOWNgraded with certain listed parts from the spec list being dropped !???
I do hope the (Tekna+) LED fog light will not be dropped ... that I would not accept.
Price increase has already been a fact in some regions according to the price lists I could find on regional Nissan websites, but would this mean ... even more price-creep is coming ?
Delivery March ... seems normal under these extraordinary circumstances.
Some spec options not available ... I wonder which those are because I have ALL possible options of the Tekna+ (even those not included in certain regions) which would explain why my J12, ordered back in March/April is still nowhere to be seen !

[BTW My -current- car has received servicing today with some parts replaced ... can't wait forever for my QQ to be delivered.
(and I did trade/sell my car to the Nissan dealership when it was in superb condition and want to keep it that way ... I have to stick to my part of the arrangement).]

I am curious what is going to happen next

QaiFan, please remember that these Guys work essentially for Nissan and Confidential information has to be protected, therefore these were just questions that came to mind. They are obviously not going to let information out that is Internal & Protected and put their jobs at risk - Dave

As mentioned on Point 3 it states “Internal” changes and from what I understood nothing changes to the Tekna as essentially it is the Top Model and from what I understood Spec Changes are not specific to the Tekna.
The possibility of a price increase for me is new, I have never heard this before out here.
I did get given a German Copy of the “Auto Motor Sport” Magazine #17 which has 14 pages of information on the J12, it just needs reading !
I think you just have to wait and see what comes in the end, you cannot keep worrying about these Specs or Changes they are just out of your hands at present. Again I mentioned today I am still interested in the J12 but it not a “Must” that I order one as our J11B is still “Tip Top”, so I will just keep an eye on the situation. Basically you have I assume a Contract / Tekna + Specification with a Dealer and he is really is your contact for questions, answers and up to date information.
11.19/1.3L/160PS/Tekna+/DCT/PrOPILOT/KAD Gun Metallic/Trunk Lower Finisher/Rear Glass Finisher/Ambient Lighting-LED’s Innen/Entry Guards Illuminated/Sport Pedals/Front Styling Plate/LED No.Plate/Chrome Door Handles/Rear Valance/Giacuzzo Alloys + Falken
Top

1. There is No Digital / Mechanical Indicator for the J12 Lithium Battery Status.

That's strange. The Prius has had one from the earliest days and I've previously mentioned that even my Ignis has one. I'd have thought it an advantage showing the driver when the car's accumulating energy. Teaches you to adjust your driving style to maximise regeneration.
(2015 Nissan Qashqai Tekna DIG-T 1.2 sold 15/6/18) ~ 2018 Suzuki Ignis SZ5 - 2018 Yamaha MT-07
Top

Gloucester, I am quite convinced the reason that there is no mild hybrid indicator is the fact the firmware was simply copied from the already existing US Nissan rogue. Nissan probably didn't bother to reimagine functionality for the mild hybrid version!?
But indeed, this is a serious issue since we have no idea if the Nissan hyped mid hybrid system works at all... that assist claim could be a dud ... according to some reviews I read it doesn't 'assist' much anyway.
Since we can't use Airco for the Alis 12v battery assist system to work at all (as reported by some drivers) , it seems completely useless to me!
All these 12v as well as 48v systems are insanely ... Expensive. A car with those systems is often thousands of pounds more expensive compared to a plain ICE. Scary about all this is that it will prevent us from keeping our cars for longer than say, 10 years, because replacing the battery will probably be so expensive we would rather sell the car... In time!
Top

So more criticisms on this “Mild Hybrid” System all from reports but are there any New Owner comments that can shed any light on this System - whether Good or Bad ! - Dave

Now was’nt the US Nissan Rogue a “Hybrid” not a “Mild Hybrid” and this did in fact have an Indicator Light within the Dash. It is no longer issued due to it appears reasons not involved with the Hybrid System, just dislikes and the lose of the 3rd Row of Seats.
“There are no more hybrid Nissan models to choose from in the US since the Rogue Hybrid is no more. The demise of Nissan’s hybrid car came as a result of low ratings and sales figures. Nissan’s hybrid model was aimed at being one of the most reliable autos in the segment that could be purchased at a relatively cheap price.
Reviews of the automobile were not scathing, but the USA did not welcome Nissan’s hybrid vehicle with open arms, and this may be the reason why the automaker is hesitant to release another eco-friendly spec for 2021. Hybrid battery tech directly results in better mpg figures, an important purchasing aspect for many shoppers.”

This might be of interest explaining the “Mild Hybrid” System :
Hybrid Electric Cars | Plug-in PHEV & Self Charging | Nissan : https://www.nissan.co.uk/range/mild-hybrid-cars.html 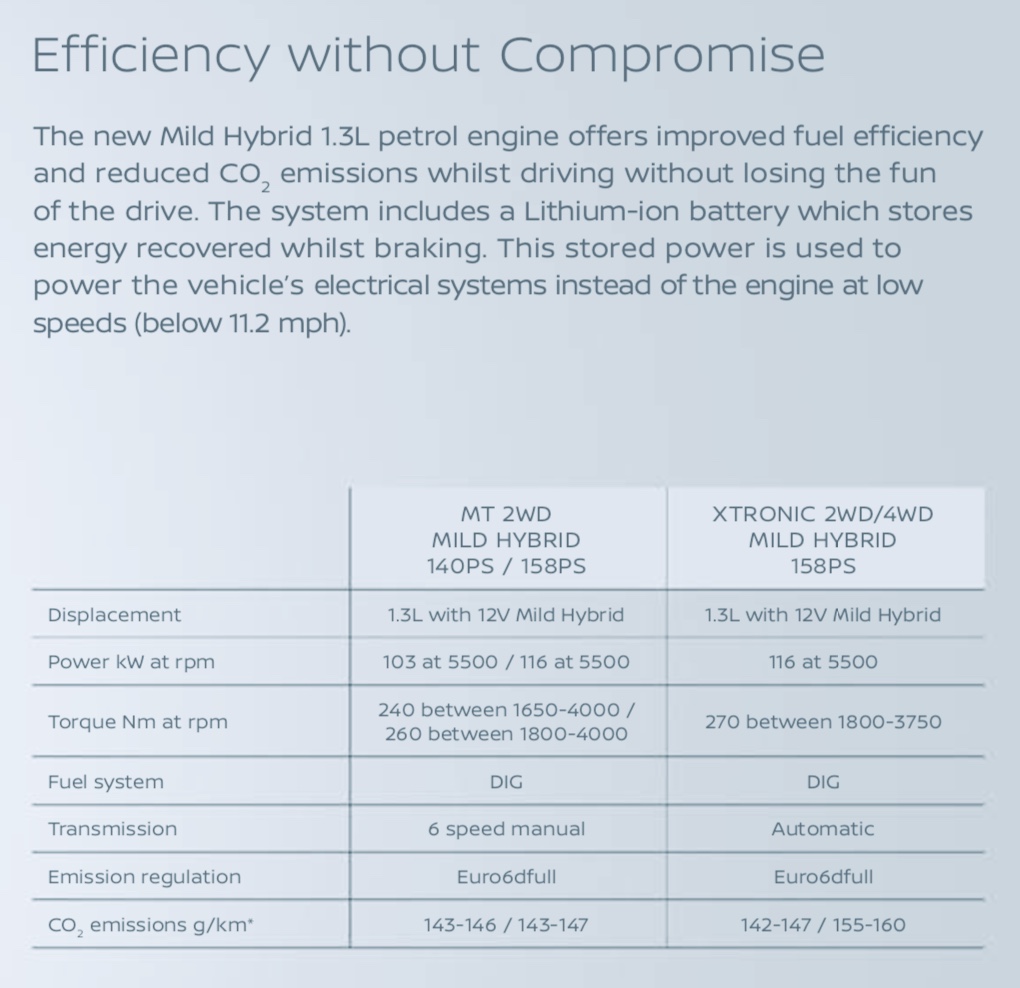 Gloucester, if I am wrong please correct me

I found this comment on your Ignis (Mild Hybrid) :
“So it's a hybrid? Not exactly. It's a mild hybrid, which means it has a small battery that sits under the front passenger seat. This powers a starter-generator that's attached to the engine in a way that's a bit boring to explain.
Essentially, it’s not big enough to move the car on its own, but it does improve the Ignis' performance at low revs. If you ease off the accelerator while driving, it'll top the battery back up again - which it shows you it's doing on the dashboard (even though it looks like a diagram drawn by GCSE physics students)”.

Toyota Prius (Hybrid) :
As well as mild hybrids, there are three other types of hybrids, and each works in a different way. The Toyota Prius is the most widely known example of this type of hybrid. The car's wheels can be powered directly by the engine, by the electric motor alone, or by both power sources working together.
11.19/1.3L/160PS/Tekna+/DCT/PrOPILOT/KAD Gun Metallic/Trunk Lower Finisher/Rear Glass Finisher/Ambient Lighting-LED’s Innen/Entry Guards Illuminated/Sport Pedals/Front Styling Plate/LED No.Plate/Chrome Door Handles/Rear Valance/Giacuzzo Alloys + Falken
Top

Yes - that's correct - it's only a mild hybrid - and can't drive by itself.

"So more criticisms on this “Mild Hybrid” System all from reports but are there any New Owner comments that can shed any light on this System - whether Good or Bad ! "
Not only this (Nissan mild hybrid) but I, personally question all these systems that, AFAIK, cost customers/drivers *quite a lot of money* to include in their cars, yet only amount to say 1-2 l / 60 miles gain at the very best !
My biggest gripe is however is, in time, the replacement and/or repair of these lithium ion battery systems ... can't be cheap to be replaced at all !?
IMHO "eco-friendly" : ICE motor + 12 / 48 V battery systems and surely PHEVs are about as bad as it gets for our environment.
But you are right DaveBerlin (and I truly hope I am very wrong) ... as long as I did not, myself, experience the benefits of this mild-hybrid tech (yet that is, I should be soon) I'd better refrain from any criticism.
Top
Post Reply
134 posts